A Neil over at Webdrive sent through this chart showing the impact of Wednesday’s Groupy $1 Hell pizza promotion with advertising over on Stuff. This is showing the amount of traffic coming in and going out, which approached 60 Mbits/sec inbound as the news spread. 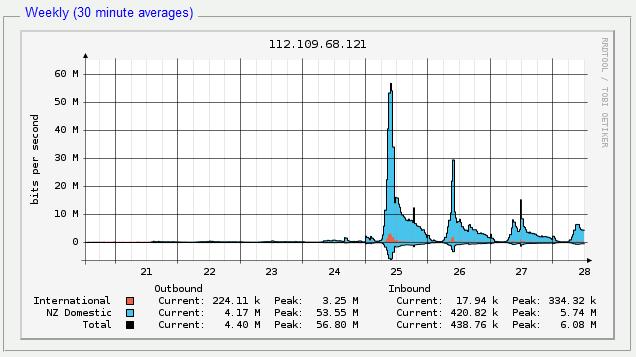 Sorry I cannot report the actual numbers on this, but the percentage increase was certainly dramatic.

While the site threw up a few errors it didn’t actually go down, which is critical during events like this. The traffic was a lot larger than expected, and Webdrive put a couple more servers to the task to cope.  The external email provider rate limited the sending of emails, despite telling us that they would not. This took a while to resolve but eventually they got sent later in the day or evening. The subscriber base went up by several times, and 15000 people and their friends get to eat Hell Pizzas for $1.

All in all an excellent promotion for Groupy, Hell and customers.

19 replies on “The Groupy promotion impact”