The last round of VC investors into Theranos makes for somber reading. In March 2015 Theranos raised an estimated US$573 million for their 6th round, making a total of $750 million raised. Their 7th round, for $200m, has apparently blown up before completion. Theranos was selling a blood testing service that apparently needed tiny amounts of blood to work.

The 5 investors from March 2015 should be deeply ashamed, as should those who almost committed in the 7th round.

The Wall St Journal broke the story first, and a few weeks later it seems clear that their blood-testing technology is hokum, their partnership with huge pharmacy chain Walgreens now dissolved and the company under criminal investigation. The reputation of once superstar CEO Elizabeth Holmes is in tatters.

So how do you stop this sort of dumb investment happening?

At the earliest, and every, stage in investing the investors need to do their work. That means an end to end look at the company, and not just at the numbers and forecasts. Too often investors think due diligence should focus on tiny, mainly financial, details and they miss out on the obvious flaws.

My favourite example of investors missing the obvious was NZ Telecom’s sale of Yellow Pages for NZ$2.24 billion in 2007 to sophisticated private equity investors. The investors certainly looked at the numbers, but failed to look at the end users – who were already rapidly migrating away from paper pages towards online and mobile services. The result was huge losses for those investors – huge and very obvious losses for anyone that really thought about the future of phone directories.

For IP-related companies like Theranos it’s easy to talk fast and show the magic, so  you want to be investors who really understand the technology, and who can actually walk the floor, talk to the scientists and technicians, look at the patents and make sure it all works as they say it does. It’s clear several rounds of investors didn’t really do their job here.

With pre-commercial IP, which we see at Return on Science, it’s expected that there is a lot of uncertainty and  “I don’t know” answers about the business model, and how the IP will work in practice. That’s why around the table of the Return on Science investment committees are almost always at least some people who understand a particular technology and business being presented as well as people who understand investment, and usually both. Those committees are only recommending relatively small grants though – generally not even 1% of the the US$7m first round that Theranos took on board. 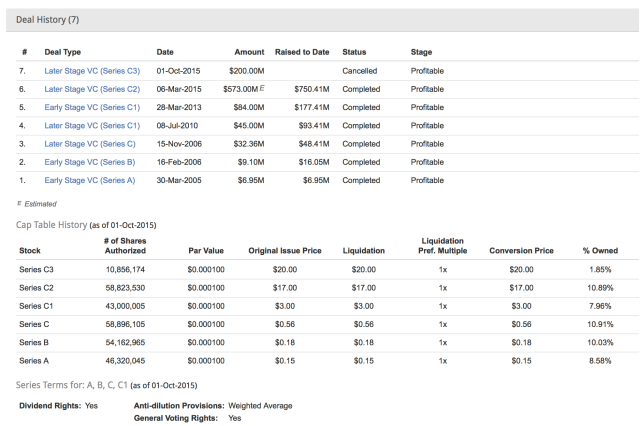 Investors do take risks, but we should also seek to minimise the risks to the controllable things. For Theranos the earliest investors would expect to have a real risk of losing everything, and should have dived deeply into the IP, but were also backing the CEO and the team to execute well. The latest investors are no-doubt highly surprised that they will lose everything (it seems) and relied on the CEO and board telling the truth. It’s a shocking situation and yet they will all be asking how they could have prevented the loss.

It’s not often, I hope, that a company is built on what appears to be layers of fraudulent behaviour (that’s what the criminal investigation is about), and it’s a nightmare for investors when the layers of trust fall apart. So what can we learn?

So what I take from this is a reiteration of a lessons we should all know as investors. I’ve learned all of these the hard way, luckily with my own money rather than other people’s:

One reply on “Learning from Theranos”