The Taxpayers Union is a lobby group who, seemingly, would like to get rid of all tax. Insider Dave Farrar covered their latest attack on tax, which is on rates in Auckland.

It’s ridiculous. We actually have a great deal here and we have the opportunity to invest a lot more into making Auckland even better.

So let’s walk through the basics about rates, a tax that we use to fund councils to provide transport, infrastructure and all sorts of other services. Rates that are paid by Auckland ratepayers will substitute somewhat for tax paid to the national government, which needs to invest back into Auckland. So higher rates for Aucklanders should lower Wellington resident Dave Farrar’s own taxes, so I’m sure he will be a fan.

Firstly 34% of people and 32% of ratepayers live in Auckland, and 50% in Auckland, Christchurch, Wellington and Hamilton. So when it comes to ratepayers the cities matter. Auckland is growing very quickly, and has a legacy of underinvestment to catch up on. We need to spend a lot more than we are getting.

Number of Ratepayers by Region

But the cities seem to pay lower rates as a percentage of their home value, and Auckland in particular looks suspiciously low.

Auckland has the lowest rates in New Zealand

Sorting the list by Rates Paid/Average Price shows that Auckland is offering the lowest rates in the country, at just 0.22% of the average house price per year.

That’s almost 30% less than the 0.31% fees lowest cost Kiwisaver provider Simplicity charges to invest your money and over 75% cheaper than Fisher Funds charges for their more traditional (expensive) Kiwisaver plan.

No wonder so many people want to live here.

Plenty of room to rise

The average rate payer in New Zealand pays just 0.35% of their house value each year, still far less than most Kiwisaver providers.

If we had a single nation-wide standard rates fee as a percentage of home value then we would have a national rate of 0.35% of home value. That would mean rates in Auckland would rise by 50%, in Queenstown Lakes by 29% and everywhere else the rates would fall.

So here in Auckland we underpay our rates, and the national government has to subsidise (and they don’t enough) our infrastructure more than they should. they certainly pay their way in Waitomo –  if Aucklanders paid as much as they did there then rates would rise by 550%.

A 50% rate rise in Auckland is entirely justifiable, and the rest of New Zealand should be demanding we pay our fair share, and lowering their rates too. But can Aucklanders afford to pay more?

Over just the last year homeowners have, almost everywhere, made substantial capital gains and once again Auckland’s did very well.

Let’s compare those tax-free capital gains last year with the actual rates paid last year. The capital gains are the long orange lines below, and the rates are the barely visible blue lines. Remember this is just last year – Aucklanders have enjoyed a sustained period of growth in property values. 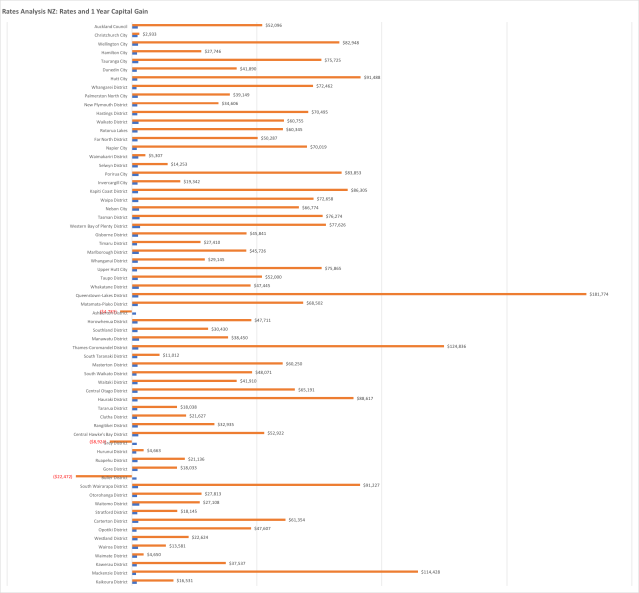 Last year alone Auckland ratepayers averaged a tax free gain of $52,000 from each property, and they paid an average of just $2,340 in rates. The gain is 2226% greater than the cost, a ratio any Kiwisaver fund would be proud to brag about.

We all need to stop complaining our rates, especially those who can afford to pay them with cash, and who are sitting on vast windfall gains.

If you can’t afford to pay then check out the programs that Auckland Council has for low income households. Or talk to your bank about how to cash in on your windfall gains.

So let’s start talking about the great deal we have in Auckland, and our capacity to increase rates. Let’s start thinking instead about how we can accelerate some of the transformational progress that has been made already.

Sources:
I copied some data from the Taxpayers Union microsite [they want your details], and added the July 2017 data from the QV Residential House Values page for July 2017. I removed Kaipara and Waimakariri (1.6% of population) from some of the data as they did not have compete stats. All mistakes mine.

4 replies on “Stop complaining about rates in Auckland”